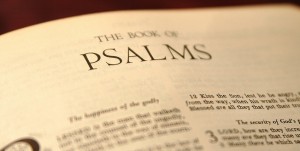 Years ago, I was chatting with a friend’s mom, and I told her I was a follower of Christ. She asked me if I was a student of the Bible, and I woefully admitted that I was not, but hoped to be someday. Fast forward many years and I’m a rail commuter in Chicago. It was a three-hour round trip, with lots of sitting, and God kinda spoke, asking if I was going to waste all this time, or do something with it.

That was when I started to study the Word with a Bible and some legal pads. I must’ve gone through dozens of them. I started in the New Testament. About the time I hit the Old Testament, I had graduated to a “luggable” computer with DOS 1.35 (predates laptops—I told you it was several years ago) and some Bible software on floppy disks.

From that point and 27 years later I can now call myself a student of the Word. I have no theological degrees, but I have spent a lot of time in The Word and with The Author.

Since these lyrics (these Psalms) are so much about Him, it is my prayer you will come before the LORD and know Him better and deeper; that you will sing His Praises; learn to sing with Him, and He will be the Song of Your Life!