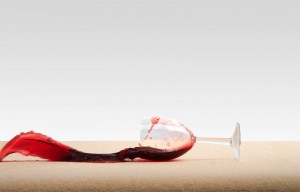 Then they brought Him to the place Golgotha, which is translated, Place of a Skull. They tried to give Him wine mixed with myrrh; but He did not take it. (Mark 15:22)

Much of the crucifixion narrative is not recorded here in Mark. So to get the entire landscape of what went on, it is necessary to walk through all the Gospels. But here, just before Christ is nailed to the cross, they offer Him a drink of wine mixed with myrrh.

Apparently this concoction was used to dull the senses. But Christ chose not to drink this. He chose to be fully aware of all the sins of the world that were clinging to Him. He would be conscious of each and every sin ever committed by mankind. He would feel the pain and heartache of everyone of those sins.

Do you understand why it was necessary for the Son of God to die?  No one else could fathom the length, breadth and depth of these accumulated and concentrated sins; and no one else could identify them individually—the sins and the sinners. He knows your sins—each sin, every sin—so when He stood before His Father in heaven He could say: I died for his sins. I died for her sins. He died for your sin.

Now the question is: Are we fully conscious of our own sins? Or is there some sort of variation of the wine and myrrh that is a regular part of our diet? Is there something clouding your understanding Who Christ is?