So what is God doing around this verse, which should cause us to Cease Striving?

The nations made an uproar, the kingdoms tottered; He raised His voice, the earth melted. The Lord of hosts is with us; The God of Jacob is our stronghold. Selah. Come, behold the works of the Lord, Who has wrought desolations in the earth. He makes wars to cease to the end of the earth; He breaks the bow and cuts the spear in two; He burns the chariots with fire. (vs. 6-9)

The first thing that our great God does in an apocalyptic, world-ending, cataclysmic kind of way is that he raised his voice and the earth melted. Earth is a very common word in the Hebrew, occurring well over 2000 times. Most of the time it is translated as land, and the next most translation is earth. It could mean countries, it could mean countryside, and even the ground we walk on. But it can also be translated as world. Now melted only occurs 17 times in the OT and it literally means to melt, and dissolve. It also means to faint, and be fainthearted. So rather than literally melting, it could mean that the hearts of those who are in this event melted. Now whether it was (or is) a local, or global, or personal event, God thundered, and everything came to a screeching halt. 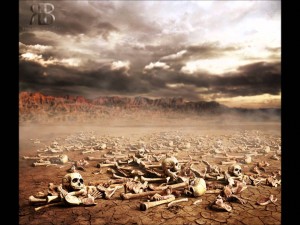 The next thing that God brought was desolations in the earth. Now this word can also be translated as destruction, horror, and waste. Pretty intense. And why does he do this? To end the wars.

Now I gotta admit, that seems a bit over the top; more like overkill. Why not just cause things to stop, to cease? Why bring about desolation and destruction? Well, you know the answer. Just putting the brakes on would be enough to get our attention, but it wouldn’t be enough to get us to change. Just getting us to stop would not bring about repentance in our lives. But losing everything? Yeah, that could.

Next time… So why does God go to such extremes?