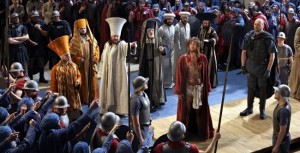 So when the chief priests and the officers saw Him, they cried out saying, “Crucify, crucify!” Pilate said to them, “Take Him yourselves and crucify Him, for I find no guilt in Him.”  (John 19:6)

Pilate knew the Jews wanted His death, now he knew how much: to crucify Him. Crucify is found only in the New Testament, and it was first used by Christ to prophecy the kind of death He would die. The next time the words appear was when the chief priests and crew cried out for His crucifixion.

As far as these court proceedings, Pilate had determined His rightful innocence and saw no reason for His death, at least under Roman law. This Gentile, although unable to stick to his conviction and ruling, did what the Jewish court could not. He pronounced Christ innocent. He did not see Jesus as a threat to his authority, nor to the authority of Rome. This was some sort of religious squabble within the Jewish community.

The Jews answered him, “We have a law, and by that law He ought to die because He made Himself out to be the Son of God.” (John 19:7)

Note: the charge had changed, the other shoe had dropped. We learn specifically in Luke that Christ was first accused by the Jews for sedition. And for that Pilate had made his ruling: not guilty. So then came their real reason, their real motivation for coming to Pilate. Christ had claimed to be the Son of God; and that was interpreted by the Jews as blasphemy. Not knowing if the accusation was true or not, Pilate opened himself up to be maneuvered into sentencing Christ the way the Jews wanted.

It was no longer about Roman law, it was about Jewish law—Jewish religious law. From a cultural perspective, Pilate would have no expertise from which to make such a ruling. But from a political perspective, He had to make a ruling. But the question here is: Why would he have to? It should have been irrelevant. One could easily make more room in the Roman Pantheon of god’s for this minor Hebrew God. But it was a much bigger deal for the Jews.

Therefore when Pilate heard this statement, he was even more afraid; and he entered into the Praetorium again and said to Jesus, “Where are You from?” But Jesus gave him no answer. So Pilate said to Him, “You do not speak to me? Do You not know that I have authority to release You, and I have authority to crucify You?” Jesus answered, “You would have no authority over Me, unless it had been given you from above; for this reason he who delivered Me to you has the greater sin.” (John 19:8-11)

Pilate’s fear grew. He was running out of options, and his commitment to do the right thing was overwhelmed by the commitment of the Jews to get rid of Christ once and for all.

The Greek word for fear is phobeos and has to do with getting out of Dodge—or rather, Jerusalem. Pilate wanted to flee, to fly away; but he could not.

His authority obviously held no sway over the convictions of the Jews—his not guilty sentence was ignored.

Nor did further political negotiations work.

As a result of this Pilate made efforts to release Him, but the Jews cried out saying, “If you release this Man, you are no friend of Caesar; everyone who makes himself out to be a king opposes Caesar.” (John 19:12)

As we had seen earlier, Pilate was the one who had given Christ the title of “King of the Jews”. What he heard from the lips of Christ and His “otherworldly kingdom” posed little threat to Rome. The Jewish leaders, on the other hand, took this as a threat and forced it into a Roman context.

“If you release this Man, you are no friend of Caesar”. I find it interesting that this politico-religious body way outside the Roman culture should know just who is and who is not a friend to Caesar. But just the reference was enough to drag Pilate back to the Jew’s version of reality.

Everyone who makes himself out to be a king opposes Caesar. The Jews would not let this rest. Pilate picked the name King of the Jews, and the Pharisees picked the fight; and they made sure this was a fight they would win.

Therefore when Pilate heard these words, he brought Jesus out, and sat down on the judgment seat at a place called The Pavement, but in Hebrew, Gabbatha. Now it was the day of preparation for the Passover; it was about the sixth hour. And he said to the Jews, “Behold, your King!” So they cried out, “Away with Him, away with Him, crucify Him!” Pilate said to them, “Shall I crucify your King?” The chief priests answered, “We have no king but Caesar.” So he then handed Him over to them to be crucified. (John 19:13-16)