O my God, scatter them like tumbleweed, like chaff before the wind! As a fire burns a forest and as a flame sets mountains ablaze, chase them with your fierce storm; terrify them with your tempest. Utterly disgrace them until they submit to your name, O Lord. Let them be ashamed and terrified forever. Let them die in disgrace. Then they will learn that you alone are called the Lord, that you alone are the Most High, supreme over all the earth. (Psalm 83:13-18)

Normally I don’t quote so many verses in a single study—at least not in one place. I may 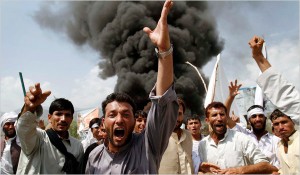 spread them out over a number of days, pull Scripture from all over the Bible to show how consistent and clear God’s Word is. But in the above six verses, which are the last verses of this Psalm, there is just one simple thing to learn.

Sound familiar? 2700 years later you still have people making the same threats. But they forget about the same God, who loves His people Israel.

So the psalmist asks for God to scatter them, burn them, chase them, terrify them, and disgrace them, until they submit to His name. The apostle Paul makes a similar statement in Philippians chapter 2: That at the name of Jesus every knee should bow, in heaven and on earth and under the earth, and every tongue declare that Jesus Christ is Lord, to the glory of God the Father. (vs. 9-11) Paul makes it clear that every knee shall bow and every tongue declare, regardless of your opinion of the LORD.

Then I will rejoice in the Lord. I will be glad because he rescues me. With every bone in my body I will praise him: “Lord, who can compare with you? (Psalm 35:9-10)

With every bone in my body. When I looked up the word for bone in the Hebrew, it meant…bone. But it also means (as secondary translations) body, limbs, self and strength. That’s a pretty significant commitment for praise. And when you add the word every, which is also translated as whole, all, completely, anything, whatever and whenever, the praise become totally consuming.

When’s the last time you praised the LORD with every bone in your body? With all that you are? David did so after the Lord delivered him. That’s a good reason to be “all in.” Being saved is another. And thinking about how God saved us, is there ever a time when praise for that gets old? I hope not.

Another question is: is that kind of depth and commitment of praise beyond you? Well it’s not that the Lord isn’t deserving of such praise, whether it is a result of what He has done for us, or just because He is who He is. So when it comes to praising God with every bone in my body, the problem lies completely within us. What can we do?

The Apostle Paul has some counsel which should help: Always be joyful. Never stop praying. Be thankful in all circumstances, for this is God’s will for you who belong to Christ Jesus. Did you catch those sweeping generalities? Always… never…all circumstances. In order to do that requires we spend serious time in His presence. Did I say serious? I meant ALL time. Now that’s no big deal for God. He is, after all, omnipresent and omniscient. But imagine how your life would change if you lived your life always in His proximity, always in His Presence, and always with His perspective. You’d certainly be more practiced with your praise. But showing up once a week ain’t gonna do it. However, the more you praise, will help you to praise with more—even with every bone.

Keeping your life within God’s context will help you to praise Him even in the unexpected, and the overwhelming. And being thankful in all things may even get all you bones involved.