And divided up His garments among themselves, casting lots for them to decide what each man should take. (Mark 15:24) 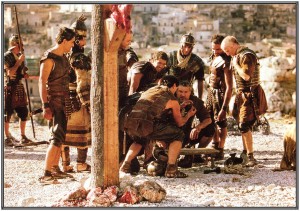 The last of the worldly possessions of Christ, and they conduct a raffle.

Lots. Something as simple as a game of chance. Rolling the dice. Who would win the robe of Christ. Once again we miss the point. We get distracted. Here is The One Who can give to us eternal life; and we’re playing games of chance. At the foot of the cross, they’re casting lots to see who’s going to win some stained and worn out garments; failing to recognize that we can be clothed in something that will last forever!

For indeed in this house we groan, longing to be clothed with our dwelling from heaven, inasmuch as we, having put it on, will not be found naked. For indeed while we are in this tent, we groan, being burdened, because we do not want to be unclothed but to be clothed, so that what is mortal will be swallowed up by life. (2 Corinthians 5:2-4)

For all of you who were baptized into Christ have clothed yourselves with Christ. (Galatians 3:27)

Rolling dice—or casting lots—is not a wise thing to do when your eternal soul hangs in the balance. Do not place your eternal welfare into the hands of chance. Be intentional. Choose Christ.

I never knew until today the phrase, “My lot in life”, comes out of the practice of casting lots. Now there are examples of godly Jews and Christians practicing this, but the outcome was in the hands of the LORD.

Thus Samuel brought all the tribes of Israel near, and the tribe of Benjamin was taken by lot. Then he brought the tribe of Benjamin near by its families, and the Matrite family was taken. And Saul the son of Kish was taken; but when they looked for him, he could not be found. Therefore they inquired further of the LORD, “Has the man come here yet?” So the LORD said, “Behold, he is hiding himself by the baggage.” So they ran and took him from there, and when he stood among the people, he was taller than any of the people from his shoulders upward. Samuel said to all the people, “Do you see him whom the LORD has chosen? Surely there is no one like him among all the people.” So all the people shouted and said, “Long live the king! (1 Sam 10:20-24)

So they put forward two men, Joseph called Barsabbas (who was also called Justus), and Matthias. And they prayed and said, “You, Lord, who know the hearts of all men, show which one of these two You have chosen to occupy this ministry and apostleship from which Judas turned aside to go to his own place.” And they drew lots for them, and the lot fell to Matthias; and he was added to the eleven apostles. (Acts 1:23-26)

The LORD is the portion of my inheritance and my cup; You support my lot. (Psalm 16:5) Another way to read this is: You hold my lot.

Now the problem with these guys casting lots at the foot of the cross is common with every false worshiper: it is a practice for which they have seen godly people perform, but for them, it provides the opportunity to cast off blame (e.g.- the decision was made by the gods). Now we all have our reasons, our justifications, and our excuses for what we do, and we can even claim ignorance at times, but none of these hollow rationalizations will stand before The One True God.

But back to the soldiers casting lots; it was actually the fulfillment of prophecy, as found in Psalm 22:18. They divide my garments among them, And for my clothing they cast lots.

The Greek word for casting has several definitions. Most are what you would expect—like the physical act of throwing something. But another translations has to do with lying sick or lying paralyzed. This is an appropriate description for those who are playing games at the foot of the cross. How many of us could come to Christ for healing, but we don’t even know that we are sick?

So what’s the outcome of this passage? One soldier won some raggedy, bloody clothes. Now I suppose they would have had great value in the indulgence market; but like indulgences, they are only a distraction. They all walked away from The One Who could clothe them with new life.

For all of you who were baptized into Christ have clothed yourselves with Christ. ( Gal 3:27)

Don’t play games. Don’t walk away. Embrace The One Who can give you eternal life.